A new addition to the bench! 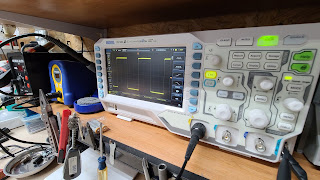 When I was five years old, I used to play with my father's oscilloscope. It was a massive hunk of gray metal with a round screen that I thought looked like a port window on a ship. With the flip of a switch, the screen would glow green with faint yellow lines running up and down and left and right. I used to press my face to the screen and pretend I was looking out of a submarine, hundreds of feet below the surface of the ocean, peering into the murky green waters. Unfortunately, I never saw a fish.
Later I would twist and turn the knobs (I had no idea what I was doing) until I would see a dot zip across the screen. I discovered if I put my fingers near the little plugs on the front of the device, the dot would jump and move in strange directions. 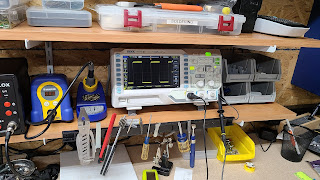 Now, 45 years later, I have finally purchased my own scope. It's a far cry from that old behemoth but it's still just as exciting. I've found a nice little spot on my bench (it's a WHOLE lot smaller!) and have begun to work through the setup. Unfortunately, I still don't know what I'm doing, but thanks to YouTube and my my son the engineer, I'm learning!