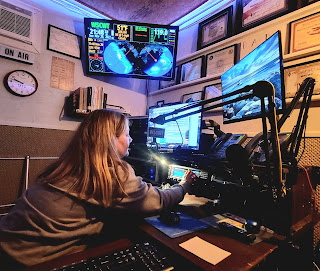 The ARRL Sweepstakes was the first contest I ever participated in. Way back in 1993, my buddy (KA0ZWV) and I joined forces on in our college station. It was on the 3rd floor of the school library and had an amazing tri-bander on top. The only problem was, after dark the bands died and we were dead in the water.

The building was not a typical structure. It was basically an open steel frame with concrete floors. The whole structure was surrounded with a glass façade. Imaging placing a rectangle fishing tank upside-down over a parking garage. If you stood on the 3rd floor at the end of the hall you could reach out and touch the windows, but you could also look down and yell at the guy on the first floor. The point is, there two large metal frames at each end of the building holding the whole thing up. So, we drug the coax down the hall and alligator clipped it to the metal - we lit up the whole side of the library. I'm not sure how, but it tuned up and we worked 80 meters all night.

Ever since then, Sweepstakes has held a special place in my heart. Every year, I try to spend at least sometime during the third weekend in November work the contest. For the past few years, my son (KG5CZR) or my wife (KC5ERV) have helped out, making us a "multi-op" station. It's been fun and this year was no exception! This year, I used by FTDX-3000 and my relatively new boom with a Heil Goldline mic. I had two antennas; an 80 meter dipole and a three-month old Hustler 6-BTV vertical. It worked very well, although there were times I was in the noise on 40m. I need more radials!

I absolutely love N1MM logging software. It's amazing and, having used it for so many years, it's like a trusted companion in the shack. All the windows go right where I need them and it takes my data entry without a hitch! I kind of chuckle when I hear an operator say, "hang on, I got the info in the wrong place." With N1MM, I type it however I hear it and it magically figures out which is the serial number and which is check! I also love the Band Map feature which tracks where the stations are on the band so I can avoid ones I've already worked and go back to ones I wasn't able to pull in an hour ago. I can't beat N1MM.

It's hard to believe another SS has come and gone...can't wait until next year!